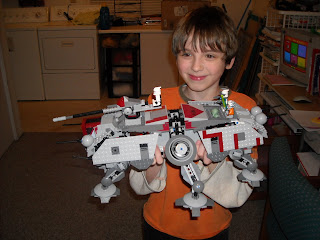 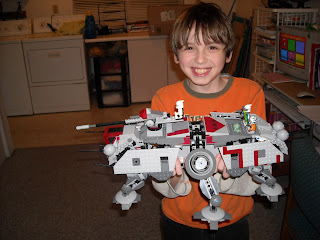 Ethan worked diligently for several hours (over the course of a 24 hr period), putting this last birthday gift together from Papa Russ, Grandma Deb, and Aunt Dyon.


A huge, just-shy-of-600-pieces Star Wars Lego set!
Now normally, Ethan immediately asks Dad to help him (which basically turns into Dean putting it together for him), because he gets overwhelmed just looking at all the pieces. But not this time! I was very proud of the fact that he never once asked Daddy for help, even when he became confused or visibly frustrated.
In fact, he exercised an incredible amount of self-control that I've never seen in him before. Not once did I have to say, "Maybe you should take a break, Buddy." Because he took it upon himself to take those breaks whenever he needed them. (Maybe he's matured a bit more than I'd realized?)
Sure, he bounced around like a bunny on No-Doz during his spelling lesson, but he was all business when it came to Lego building. (Ahem)
Anyway, as I was saying; it may have taken him several hours, but he eventually completed his masterpiece. :o)
And the look of satisfaction on his face made it all worthwhile.
**Correction: I've been informed that the kit contained over 800 pieces, not 600. Ahem.**
Brought to you by Unknown at 3:02 PM

Love Legos! Those are some of the best toys in the world.

It's so fun to see our kids maturing.