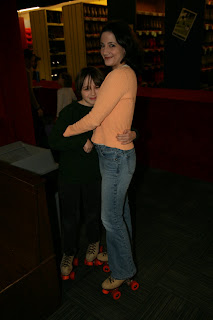 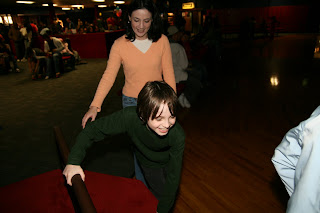 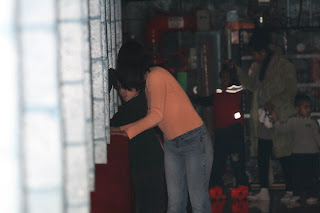 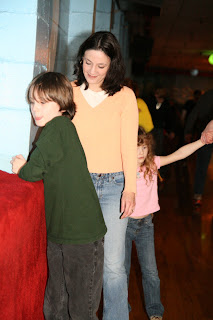 Ethan was invited to his friend, Ioan's 11th birthday party yesterday afternoon. This was only Ethan's second time on roller skates (the first time being a good 3+ years ago!), and as you can *clearly see*, he was very nervous with wheels attached to his feet.

At first I just scooted around on the carpet with him, allowing him to slowly get used to his skates. After about an hour, several warnings not to bring me down with him, and MUCH coaxing from his friends Ioan, Roman, and their older brother Adam (whom I've deemed Sierra's first beau based entirely on looks--before I realized he was Roman and Ioan's brother--but I digress), he finally built up enough courage to make his way out onto the slippery rink floor.

"Rollaway Skate" (which hasn't changed a bit since I celebrated my 8th (9th?) birthday party there!) has two carpeted sides along two walls, so that beginning skaters can hold on (for dear life) as they make their way around the rink. The tricky part comes when you hit the brick wall along the back. Then there's nothing to do except do your best SpiderMan impression and suction-cup your hands along in a desperate attempt to make it to the other carpeted side.

What I found most interesting about the whole experience was the nostalgia factor. Not only has 25+ years left Rollaway completely unchanged (honestly, even the SKATES looked the same...Eww!), but the music hasn't changed much either. Intermingled with a little Hannah Montana and some other funky artist that I couldn't possibly name, was a serious mix of 80's tunes complete with Thriller.


The album and song that was tops on my list back in the day, which was no doubt playing during my birthday party, and was the FIRST song played as we made our way around the rink. Ha ha!! I couldn't believe it.

In the end, we only went around once but that was ok. Ethan had a great time with his friends and didn't fall down once. Woohoo!
Brought to you by Unknown at 12:24 PM