Honestly, it was hard enough for me to put this post together, and I'm a bonafide "fainter at the sight of blood". If you're half as squeamish as I am, then I emphatically implore you to not read futher.

On Friday, we were allowed to take Dean's bandages off. It was a slow process as the medical grade adhesive's about as sticky as Gorilla or SuperGlue. But we were armed with dual determination, a mirror, a pair of scissors and a bucketload of patience. :) Game on!

Things were going well until Dean pulled the bandages back far enough for me to see the incision...and then...as I was washing off the glue, I noticed something horrid. There's an opening in his neck from where the drain tube was.

By opening I mean, I could look into my spouse's neck should I be so inclined. (I wasn't.) It was ghastly, folks... (for me anyways)!!!

Immediately the room began to spin, and I thought for sure I'd either throw up or faint. I knew if I threw up I'd have to clean it up as Dean would be of no help, and if I fainted I'd hit my head on the nightstand, most likely spilling Dean's big mug of ice water onto his laptop cords. That would've been bad. (See how weird I am? I can't even faint without first making sure it won't hurt or create a mess!)

Anyway, I somehow managed to regain control of myself and successfully completed the awful task at hand. (Shudder) Here are the gory results....(don't say I didn't warn ya) 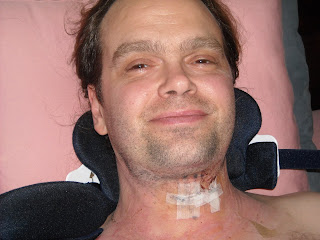 After that I was able to give Dean a shower. And actually that's the only time the collar can come off.
By the way, I've learned through that shower experience that I:
Moving on!

Dean continues to improve a little bit more each day, which is great. He's still not eating a whole lot, can't raise/lower his head on his own yet, and is growing very fed up with the whole "limiting and constricting" experience. But overall, his physical recovery is going well.

Oh, and here's one final pic. I could resist posting it as Ethan's expression was so similar to Dean's...(Hee hee) 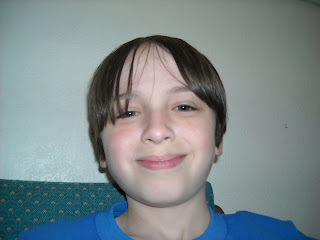 Continuing to pray. I'm so impressed you didn't get sick or pass out (like I did with Oystein's sinus surgery!)