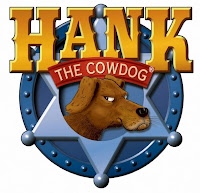 He's the rootin'est, tootin'est cowdog around, and well known among the homeschool crowd! However, I must admit that this was the first time I'd experienced Hank for myself.
Hank is a tough-talkin', ranch guardin', mystery solvin' cowboy er, cowdog living in West Texas. He and his side-kick pal, Drover (a "loyal but timid, little white mutt") and arch-enemy, Pete (the sneaky, nasty barncat) find themselves in the middle of all sorts of wild adventures. The stories are told from Hank's perspective, complete with plenty of "Old West" verbiage (think "Bonanza" with fur).

We received a review package from Maverick Books, containing 3 "Hank the Cowdog" items:

In the 8th book in the series of 54, "The Case of the One-Eyed Killer Stud Horse", Hank finds himself learning hard lessons about bacon grease, "sneezaroma", accidentally tripping Sally Mae (the Mom), little girls armed with dress-up apparel...and of course, Tuerto the Killer Stud Horse, who breaks free and must be stopped!
My initial impression of this book was, "Whoa, doggy!" Sprinkled among the Western slang were a few choice words like "dummy" and "moron". Granted, these words aren't huge no-no's but I did have to think twice about reading the book, say...in church during Shabbat class. (Never know who might be offended by such humor.)

Also, when these words are used by children to an adult (as was the case with Little Alfred calling Sally Mae a "dummy"), there is always punishment in the form of a swat. This is all done in a slightly humorous, "Boy you had it comin'!" type of way. Because of that, I don't think too many children would be influenced to actually use these words themselves, especially if their parent stresses how unacceptable such comments are while they're reading the story to them.

With that said however, I realize that these words do add to the overall "grit" of the story, so I can appreciate them on that level. My daughter, Abby really latched onto this book and is eager to read other Hank titles.

As a side note, when I mentioned this review to my friend, Rachel she said that her family LOVES Hank! I then showed her everything I received, and she and her daughter, Alex were very excited. They'd never seen the game or CD before and are now thinking about getting them. :o) Moving on...!

Next we have Tales and Tunes. This neat audio CD "contains excerpts from 10 books plus 9 original songs." To give you an idea of the series' humor, a few titles include:
The CD is brought to life by the voice talents of "Hank" author, John R. Erickson, neatly packaged in an old-time radio show style. The audio runs for 68 minutes, includes song lyrics, and is available for a very reasonable $3.00. I think this CD would make a fun enhancement to any road trip! 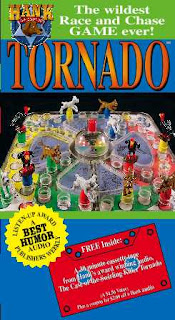 Last but not least is Hank's Tornado Game. Similar in style and function to "Sorry!", the object behind Tornado is to be the first to get all 3 of your characters (Hank, Drover and Junior the Buzzard) around the board and into "Slim's Tree" on your respected "color" (yellow, green, red, blue).

Trust me...this is no easy thing! In fact, this game could easily take a loooong time as there are a few twists to the game like:
There were many times (maybe even ALL the time?) my husband had to go back to the beginning! Ha ha! It was really kinda funny. :o) But it eventually happened to us all, hence the really long game play. In fact, I don't know who actually won--I think we may have stopped just 'cuz?

Hank's Tornado Game is recommended for ages 5 + and is for 2-4 players. It comes packaged in a foldable, plastic case (perfect for travel), and contains a bonus story cassette tape, "The Case of the Swirling Killer Tornado". It's available for $12.99.

As a special "neat-o" bonus, major Hank fans can join Hank's Security Force for $12.95. This 2 year membership club offers a free Hank story of your choice, Hank poster and bookmark, The Hank Times Newsletter, special Members Only access on the Hank website, as well as special discounts and offers throughout your membership.

I must admit that I didn't start out feeling very keen toward Hank, but by the end of our time together (or rather, this review period), that ol' scraggy dog kinda grew on me. I'm pleased to award Hank the Cowdog 1.5 thumbs up (from me) and two full hands up from Abby. :o)

Be sure to check out what other Crew Members had to say by clicking here.
Brought to you by Unknown at 2:40 PM