I recently had the privilege of viewing the matinee performance of Pacific Northwest Ballet’s Romeo et Juliette. I was prepared to be delighted and entertained, being a tremendous fan of PNB already. However I was not prepared for the high caliber of dancing coupled with such flawless character interpretation as this.

The PNB dancers breathed new life into Jean-Christophe Maillot’s intricate adaptation. From the moment I saw actual credits rolling across the screen, I knew this would be no ordinary ballet with a modern twist. This was history in the making.

The scrawling black and white credits soon gave way to sets that were clean, pure and abstract. The lighting played a greater role than I’d seen in the past, able to change the entire feel of a scene from a misty dream-like state one minute, to a cold starry night the next.

The dancers were so in tune with their characters, you easily became lost in the performance. 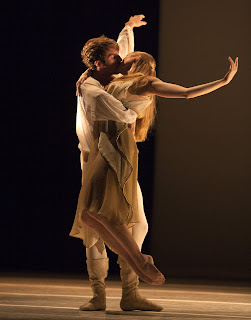 Postlewaite and Körbes alternate in the title roles with James Moore and Kaori Nakamura.

Kaori Nakamura’s Juliette was young, fresh and a bit of a “spoiled, wild child”. From “flashing” her nurse (bad girl!), to her refusal to obey her Mother’s wishes and marry Paris, Nakamura successfully channels all the feisty rebelliousness of the teen years. This is Nakamura’s first time performing as Juliette, and she beautifully exceeds all expectations.

James Moore’s Romeo is everything you’d expect from a bad boy from the wrong side of the tracks. He’s playful, rambunctious, headstrong, and a bit of a show-off, especially with the ladies. Yet for all his flaws, Moore’s Romeo was a character you couldn’t help but fall in love with.

Olivier Wevers did a superb job as Friar Laurence. As both a silent narrator and active participant to this tragedy, his performance is raw and heartbreaking; his anguish palpable. He is forever trapped in a nightmare of his own making, desperate for forgiveness that will never come.

Equally magnificent was the athleticism of the Friar’s two Acolytes, played by Jordan Pacitti and Sean Rollofson. So much of their movement was done in slow, exaggerated motion: the turns, lifts, and carefully executed rolls off the stage were riveting and poetic.

Her Nurse, expertly played by Chalnessa Eames, was clearly outwitted–and at times overwhelmed–by her young charge’s antics. Although the Nurse’s movements were silly and comedic, they carried an undertone of seriousness to her tasks at hand. There was no question regarding her devotion to Juliette.

Mara Vinson’s Lady Capulet was simply magnificent. From the moment she came into view she exuded superior control and confidence. Every inch the powerful matriarch, Vinson gave a performance so compelling I couldn’t take my eyes off of her.

Seth Orza was a very convincing Tybalt. He successfully conveyed his character’s anger, sense of family pride, and deep loathing of the Montague’s. His movements were commanding, intimidating, and breath-taking.

Mercutio and Benvolio played by Barry Kerollis and Josh Spell, round out the obnoxious Montague bunch. They live to aggravate and annoy the Capulets, most especially Tybalt. They played their roles as troublesome, arrogant pests with a hint of boyish foolishness, to the fullest.

Jeffrey Stanton’s portrayal of Paris was perfect. He was quiet, unassuming, gentlemanly; a stark contrast from Tybalt and Romeo.

Lesley Rausch played a sexy, sassy Rosaline. Her character is well-aware of her beauty and uses it to full advantage.

The attraction between Romeo and Juliette was undeniably beautiful. The Balcony scene served as an exquisite moment of foreplay, aching with longing. Their wedding was simple and elegant; their wedding night resonating with passion and joy. It was in that moment that Juliette became the pursuer, with her Romeo succumbing to her charms. Watching these two, I couldn’t help but feel as though I was witnessing pure magic.

With the dramatic fight scene at the end of Act II, the audience is suddenly catapulted into the midst of Friar Laurence’s nightmare. Like one possessed, he digs his fingers into the set as it moves eerily across the floor, trying in vain to stop the next chain of events. The terror unfolds in slow motion as the distraught Friar Laurence watches on in agony. This is the moment he was dreading. This is the moment when everything falls apart.

As the action resumes normal speed, the brutality and its aftermath hit you full-force. Lady Capulet flails about in a wild rage, her grief unlike anything you’ve ever experienced. Paris must half-carry, half-drag her away from Tybalt’s lifeless form. Her heart takes another devastating blow with the loss of her daughter. She bitterly clings to the walls as if to say, “Take me now! I can’t bear this any longer!” As a mother, you feel her cries echo through your heart as she doubles over repeatedly in anguish. Yet her reaction is nothing compared to Romeo’s. As we know, Friar Laurence’s letter has not reached him in time. Romeo cannot—will not—bear this excruciating loss.

As Juliette awakens from her slumber and discovers that her cherished Romeo is no more, you feel her gut-wrenching loss. Her body is wracked with sobs, her horrified expression crying out, “This was not how it was supposed to be!”

Unable to bear the scene before him, Friar Laurence turns his back toward the grief-stricken Juliette and clings to the wall in sorrow. Juliette then strangles herself and gently falls across her beloved’s body.

I was absolutely enthralled by this performance. It was magical, poignant, thrilling, devastating and beautifully complex. The dancer’s dramatic expressions, the careful subtleties of movement, and the striking character development work together to provide a rich, new layer to this Shakespearean tragedy. I’m so thankful to Peter Boal for adding this production to the company’s repertoire.

What at first felt like a bold move to my “classically inclined” mind, left me with an even deeper respect for PNB as a whole. This is a company that is clearly up to any challenge a choreographer or director may throw their way.

My co-worker and companion on this trip, Lisa-Marie, also found the performance captivating. In fact, this was her first time ever seeing a ballet so I'll let her reaction speak for itself: "I am spoiled for life! I can never see another ballet again without comparing it to Romeo et Juliette."

Run—do not walk—to McCaw Hall and get your tickets to see Pacific Northwest Ballet’s Romeo et Juliette. You will not be disappointed. To view ticket information and more please visit http://www.pnb.org/