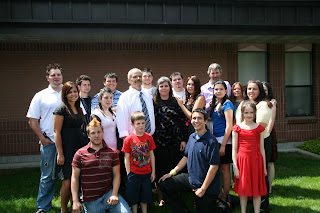 For those of you who aren't on my Facebook (or I haven't directly emailed), my Uncle Bret passed away this morning around 7am. His three year battle with cancer is over. As hard as it is now to deal with our own grief, we all know that it's for the best. He's no longer suffering--and god, how he suffered. I never want to see another loved one go through such agony like that again. Ever.

These pics were taken back on May 30th of this year, when he and his wife, Melinda renewed their wedding vows. I was glad to attend the event as I also stood as one of their witnesses the day they originally got married. 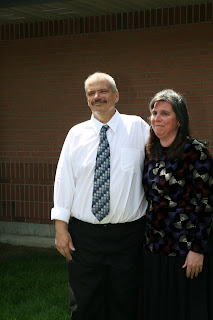 My Uncle Bret was an amazing man. He was the kind of gentleman who was always there, ready to give you the shirt off his back if you needed it. Last year when there was no money for Thanksgiving dinner, my Uncle received 2 full dinners from his church; he gave one to us. He'd sent over food and laundry soap over the past year or so as well...whatever he had extra, he was more than willing to share. Even though they were struggling worse than we were. This is only one small example of my Uncle's kindness toward me and my family. The biggest thing he ever did for me was when I was a kid...

My parents divorced when I was 4 years old. A few years after that, my Dad stopped coming to pick my sister and I up for our weekend visits. He stopped calling on our birthdays and holidays...we never heard from him. Then one Christmas, my mom surprised Desi and I by handing us each a card. We looked down at the envelopes, confused. She said, "They're from your father." We gasped in delight and tore open those suckers as fast as we could. And there inside was a Christmas card that simply said, "Love, Dad" along with ten bucks, I think.

Man, were we excited! We got a card from our Daddy! He was still thinking of us after all!

We received a card every year on our birthdays and again on Christmas. Sometimes they contained money; sometimes they didn't. But we didn't care about the money. All we cared about was the card. In fact, I was so enamored with those cards (and the thought that it was my father signing them), that I began to practice printing "like my Daddy". I soon perfected it and was quite proud of myself.

Several years later, when my sister and I moved in with our father (I was 16 then), my father never mentioned the cards and I never asked. I had the "real thing" in front of me, you know? 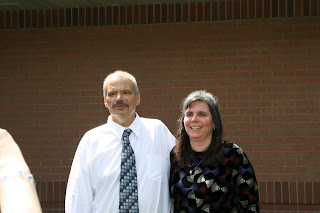 Fast forward to about 3-4 years ago. My mom and I were talking one day, and somehow the subject of the cards came up. My mom stopped and said, "Your father never sent you those cards. That was your Uncle Bret. He felt so bad for you girls, knowing how much you missed your father that he wanted to do something to make you feel better. So he asked if he could send the cards and I told him that would be ok. The years you girls didn't receive any money were the times when Uncle Bret couldn't afford it. But he was determined to send you a card at least. You were never supposed to know it was really him. He just wanted you to believe they were from your father."

It felt like the wind had been knocked out of me. Suddenly it all made sense. All that time, I hadn't perfected my Daddy's printing...I perfected my Uncle's. The man who was there for me when my father wasn't.

Suddenly I remembered the times when I'd invited my dad to attend various school assemblies and how he always came with Uncle Bret. My mom confirmed that those were the times when my Uncle *made* him come. My Uncle attended dance recitals, plays, birthdays---you name it. He was there.

When I moved back home when I was 19, with baby Sierra in my arms, my Uncle looked at my little girl and said, "She's real cute, sweetheart." He later came to her first birthday party, just as he came to mine years ago. He also helped get me a job at a pizza place (where he was also working) so I could support my daughter. 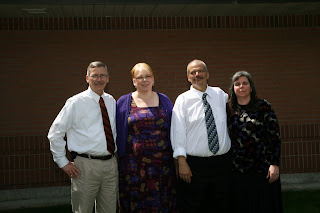 My Uncle Bret was a wonderful, beloved man. He was kind, thoughtful, funny, quick-witted, incredibly smart (graduated college with a 4.0), could fix any car or truck, an incredibly hard worker (he was a sawyer who worked even while on chemo for a long time), a power weight lifter, and very handsome. He loved a good beer (or 3) and a good margarita, eating chocolate, key lime pie and creating his own culinary creations (most of which were just straight out weird--macaroni & cheese and pineapple anyone?), watching football, and cherished his family, friends and co-workers.

He was a beautiful man, and I will always cherish every single moment I had with him. I wish I'd had more time with him--we all do. But I know that at least now, he's no longer in pain. And I have to keep reminding myself of that.

I'm so thankful we made it to the hospital in time this morning. My mom called at 6:17am. We arrived at 6:21am. It's amazing how fast Dean can drive when I'm not yelling at him to slow down.

I hope you all enjoy these pictures. I just wanted the world to know what a terrific man its missing out on. Heaven will shine just a bit brighter now that my Uncle is there. By the way, the last photo was taken the day Dean and I got married in 1998, back when my Uncle had all his thick, salt & pepper hair and his strong, healthy build. The baby in Melinda's arms is their daughter, Mary. 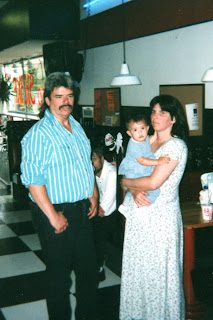 So Uncle...I want to say thank you again and if you get a chance, please say "Hi" to Grandpa, Aunt Francis, Sean, Bobby, Gram-Gram, Vern, Willy, Al, baby Keith and Caleb for me. And give your old dog Daverthump a belly rub for me, too.

PS: The group pic at the top of the post is just a few of the many people that came to see my Uncle at the hospital over the past two days. He was dearly loved by all who were fortunate enough to know him.

PPS: Cancer SUCKS.
Brought to you by Unknown at 8:37 PM

Denise~ I'm so glad you shared this beautiful tribute to your Uncle Bret. Just getting the updates over these past few months have made me feel as though I knew him. I'm glad for a bit more information about this very special guy who played such an important role in your life. What a role model!

What a beautiful tribute to your Uncle! I have tears. Thank you for sharing and I am so sorry for your lose but rejoicing in his being home with Jesus.