On Saturday evening, Dean and I took Abby and Julianah to see Pacific Northwest Ballet's Nutcracker. As you may recall from my previous post, there was some concern that the evening's festivities may have been dampened by illness. Thankfully Dean was fully recovered, and the four of us were more than ready to go!

The girls each received a special dress to wear, courtesy of their grandparents, in honor of the festive occasion. Abby was a delight in her shimmering purple gown with swooshy hem, while Julianah dazzled in her black velvet and sparkly cream skirted confection! They each had their hair in ringlets (Julianah's 'do was much more "ring like" than Abby's, which ended up looking more like tousled waves than holiday curls), and a smattering of lipgloss. They were all set! 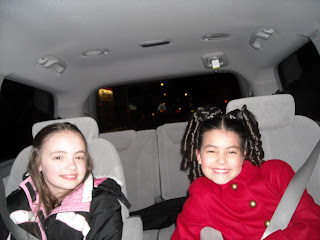 Not only were they excited to see their first "real" (ie. professional) ballet performance, but they were also in for a very special treat. Lindsi Dec, one of PNB's soloists, had offered to take the girls backstage and tour the Nutcracker sets! Ok, so back to the story! We arrived at the Seattle Center's McCaw Hall with plenty of time to spare. The girls posed for several pictures, first in front of the large Nutcracker poster... 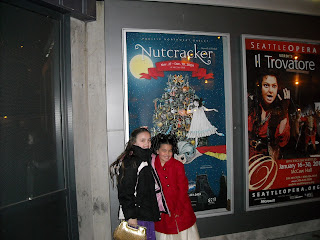 ....then inside on the makeshift Nutcracker stage!

...and with every piece of Nutcracker decor you could find!

The air was filled with the sounds of laughter and gasps of delight. Abby and Julianah were glowing with anticipation. We picked up our tickets and breezed into the gift shop, eager to see what sort of treasures we could find. Abby immediately honed in on a charming Nutcracker doll. She'd been eyeing these all over town (the cheap, crappy kind found in grocery stores) and was very misty-eyed over the one she found. It was perfect!
Then Dean helped Julianah dig through the basket of pointe shoes in search of a pair signed by Carrie Imler, also known as "Clara"! (Hooray!) You'd be hard pressed to find two happier little girls at that moment!
In addition to all the buzz and laughter, several PNB students were walking about with baskets of little Nutcracker "flair" buttons, which by the end of the night, the girls had accumulated about 4 a piece. There was also a choir of lovely Christmas carolers and a funny magician who could've been mistaken for Jack Black's brother.
Soon it was time to head out and meet Lindsi at the Stage Door. We only had to wait two minutes before the beautiful ballerina walked into the room. Oh, but wait! Who's this I see walking in with Ms. Dec? Why, it's lovely Ms. Carrie Imler herself! (Can you tell the girls were thrilled?)

Abby and Julianah were very blessed to have TWO beautiful ballerinas escort them backstage. For them, life couldn't get any cooler than this!
Carrie and Lindsi were so sweet and gracious: they hugged the girls, accepted their little Thank You notes, and told them how pretty their dresses and hair were. The girls were all smiles. Once all the greetings and introductions had been made, it was time to get our tour started!
We saw several exciting things backstage including cannons, masks, the giant Mouse King's "tail", the enormous Christmas tree being lowered down onto the stage, the Chinese Tiger's costume, Clara's bed, the golden boat (*), the cavalry's horses, and several plastic cans filled with Nutcracker snow! Both Carrie and Lindsi provided great explanations of everything the girls saw, which made the show that much more interesting later on.
The girls were especially thrilled to actually *walk across the same stage* their favorite ballerinas dance on! I had told them I wasn't sure if that would be possible, so to actually get the chance to do so was HUGE.

As you've no doubt noticed in the photo above, the girls are standing inside Clara and the Prince's golden boat. This was made possible by the kind suggestion of a very sweet Stage Hand (whom I failed to get his name--but Sir, you know who you are, and I cannot thank you enough!). As we were taking a photo of the boat, the Stage Hand came up and asked, "Would they like to climb up inside there and take a picture?" Would they ever!! :)

Obviously, they were more than willing to check out this lovely boat for themselves. (I think their happy grins say it all!) As the girls climbed back down, we thanked this wonderful Stage Hand again for his kind offer. He had the sweetest smile on his face as he said, "You're welcome" and walked away.
After the stage, the ballerinas then escorted us across the hall. They pointed out one of their Physical Therapists who, according to Carrie, "saved her life" by fixing her back. Next it was on to the Green Room just a few feet away. Inside were the evening's three "Dervishes" (James Moore, Josh Spell, Barry Kerollis) relaxing and eating a quick bite before their performance. The girls were once again in awe over everything...In fact, I don't think they said much the entire time to be honest with you. Unless you count several rounds of "Oooh! and "Wow!" :)
Our tour came to a close after about 15 minutes when Lindsi grinned, "Well, that's it--in a nutshell!" (Ha ha! Her pun received a round of good-natured groans.) We then made our way back out to the waiting area where the girls said their goodbyes and thanked their lovely tour guides.
You know, I don't think their feet even touched the ground after that. They were just in a state of rapturous joy, floating high above the clouds! But their special night wasn't over yet. It was time to find our seats and get ready to watch the show!

My formal review of the performance will be posted soon to the Class Act Tutu blog, followed by the Vala Dancewear blog, but in the meantime I will say this---it was spectacular!
Pacific Northwest Ballet once again served up a magnificent holiday treat that should not be missed! Everything from the sumptuous sets to the fabulous costumes, to the sparkling choreography to the breathtaking dancers, to finally the lush accompaniment from the PNB orchestra--all these elements came together to create the most inspirational "dream world" for every child in the audience. (Not to mention, two very grateful "baby ballerinas"!)
Thank you once again to Lindsi, Carrie, the Stage Hand (gosh, I really must find out his name!), and all of Pacific Northwest Ballet! We cannot wait to see you again very soon!
*You can purchase tickets to The Nutcracker by visiting pnb.org. Great seats are still available and the fabulous production runs through December 30th.*
Brought to you by Unknown at 2:09 PM