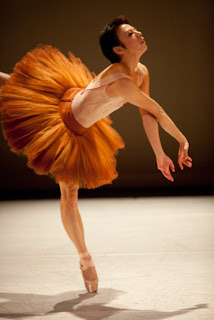 Olivier Wevers and his newly formed company, Whim W’him have done what no other dancer, choreographer or company has done before. The Seattle-based tour de force has shattered the glass barricade that once stood as the dividing wall between the world of ballet and the realm of modern dance, ushering in a new era of collaboration and artistry.

X-Stasis is comprised of 5 couples making a unique statement about their world and their relationship to one another. Standouts from this performance include Jonathan Poretta and Lucien Postlewaite’s pas de deux which sizzled with poetic tension. Their execution was both complimentary and contradictory; a raw, edgy rendition of the proverbial yin and yang. 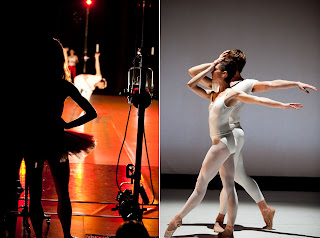 Chalnessa Eames dazzled in a delightful piece that felt a bit like an avant-garde rendition of Coppelia. Let’s just say her partner, the helpless mannequin, was no match for her seductive charms!

Fragments begins with a sweeping aria playfully mimicked by an amusing pair of friends. Kelly Ann Barton’s (Spectrum Dance Theater) and Vincent Lopez’s movements were light, fluttering, and beautifully in sync. Together they encompassed all that is childlike and well--whimsical, from their “twittering” hip rolls, to their playful dashing about the stage. Following the playful antics, Vincent Lopez gave a commanding solo performance as a tortured soul, longing and yearning to be free. Moving effortlessly through a series of well-crafted poses, Lopez is transformed into a living sculpture, relishing in its temporary freedom. Costumes by Christine Joly de Lotbiniere provided a delicious hint of Victorian flair, while Michael Mazzola’s thoughtful lighting cast the entire piece in a distinct, Renaissance glow. 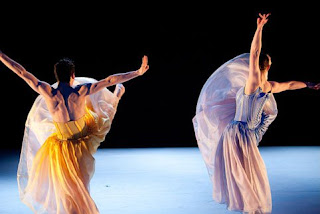 Last but not least, was 3 Seasons.

Never have I seen such a decisive take on our modern world that fused together the elements of style, wit, humor and hope so beautifully. In fact, I have a feeling that this piece will serve as the springboard by which all other collaborative efforts will be judged, and provide Whim W’him with a prominent position in the annals of dance history.

The musical score consists of Vivaldi’s Four Seasons paired with a live corresponding movement by Byron Au Yong, which was nothing short of perfection. The tinkling of a toy piano, the hum of the violin and gentle percussion created a fun, exciting, youthful energy.

Designer Michael Cepress’ vision of pairing vibrant splashes of red on ruddy, human earth tone canvasses provided the perfect backdrop for this piece. The use of his re-designed sculptural collars, wire hanger skirts, and sullied leotards made for a stunning artistic display. 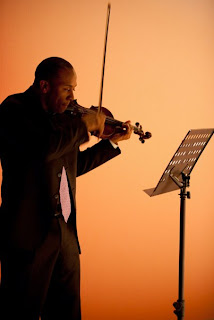 Jim Kent’s portrayal of the covetousness of human nature was thrilling. The object of his desire changes with whatever is put before him; a pillow, a lamp, a keyboard to finally a bird cage, which has to be placed on his head because there’s no more room in his hands. Kent—like society itself—is never content with what he already has, and is continuously seeking, grasping, and vying for more. The act was played for humor which the audience responded with more than a few “been there, done that” laughs.

Kaori Nakamura is used, abused and finally discarded and yet—she still manages to come out looking like the victor. Her stage presence leaves its own indelible mark of beauty behind. 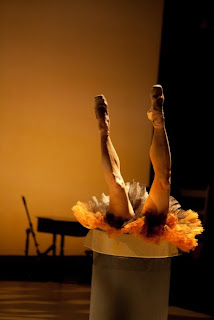 Ty Alexander Cheng and Kylie Lewallen were saucy, flirty and breathtaking. Their endless kiss reminded me of a pair of butterflies; lips locked with wings (arms) continually unfurling yet never intertwining.

Hannah Lagerway and Lucien Postlewaite writhed about in geometric splendor. I was impressed with Postlewaite’s skillful control and Lagerway’s incredible range. Indeed, her presence within this company is the icing on the cake.

With everything this company has going for it—excellent dancers, respected Artistic Director, dedicated fan base, and a growing list of collaborators—Whim W’him stands poised on the edge of a divine precipice, ready to be launched into the stratosphere.

Congratulations to you, Mr. Wevers and to your talented team of artists. Viva Whim W’him!

This post also appears on the Vala Dancewear Blog.
Brought to you by Unknown at 9:55 PM