What a gorgeous evening! There are simply not enough adjectives to describe the splendor of Pacific Northwest Ballet’s The Sleeping Beauty. This outstanding company of dancers whisks its audience deep into the heart of this beloved fairy tale, thrilling and delighting both young and old alike.

The scenery and costumes designed by Peter Docherty are lush, vibrant and visually delicious. Enchanted foliage moves to ensconce the royal castle. Costumes shimmer and sparkle with life of their own. Aurora’s bower is delicately ornate and enveloped in a golden beam of light.

The opening Christening Scene exceeded all expectations. Otto Neubert (King Florimund) and Victoria McFall (the Queen) are poised experts of their craft. Their characterization is well-established and believable.

The seven enchanted fairies and their cavaliers were dazzlingly in sync. The Cavaliers, with their impressive turns and jumps, were thrilling to watch. The fairies were perfectly cast, each bringing their own unique style and interpretation to the role. Most memorable solos include Lindsi Dec’s (Fairy of Wit) spunky finger pointing and skillful pointe work, and Chalnessa Eames‘ (Fairy of Generosity) charming, slightly coquettish performance.

Carrie Imler’s interpretation was not only masterful, but exhibited a profound sense of strength under control. I got the distinct impression that Lilac could’ve really given old Carabosse a swift kick in the skirt, but chose not to because that wouldn’t be very ladylike. Their relationship seems tethered by a delicate wisp of a truce; “I will only allow you to go so far,” Lilac’s penetrating gaze warns.

Imler’s port de bras were gorgeous and fluid; her grace extending all the way through her fingertips. Her expressions were soft but commanding; her movement precise yet poetic. Imler’s Lilac seemed to care deeply about all those within her domain, and their allegiance to her was not without cause. 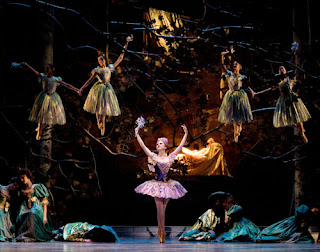 Pacific Northwest Ballet principal dancer Carla Körbes as the Lilac Fairy with her attendants, puts the kingdom under a sleeping spell in Ronald Hynd’s The Sleeping Beauty. Photo © Angela Sterling.

Jonathan Poretta’s portrayal of this devilish fairy was dramatic, powerful and just plain fun. Everything from his grand, swooping entrance accompanied by the sound of crashing cymbals and stark flashes of light, to the fiendish ways in which he lashes out over not being invited to the celebration was absolutely superb! Carabosse may be profoundly wicked, but she is still no match for the Lilac Fairy’s power. One moment, Carabosse is whirling feverishly about, her cackling laughter almost audible. The next, she is cowering on the floor under Lilac’s quietly dominating presence. I was almost sorry she was stabbed to death by the heroic Prince in the end. 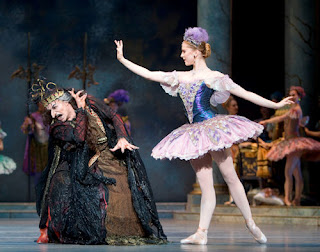 With her delicate phrasing and uncanny ability to channel the emotions of a sixteen year old Princess, Mara Vinson has secured her place as a legendary ballerina. During the famous Rose Adagio, Vinson was unfathomably brilliant. Her balance was spot-on as she greeted each of the four Dukes; her supple back hinted of the beautiful woman our heroine is to become, and her developpes unfurled toward the sky. Last but not least, those fantastic poissons (fish dives)with the Dukes and later, the Prince, were nothing short of extraordinary. Indeed, Vinson’s performance left many viewers gasping with excitement. 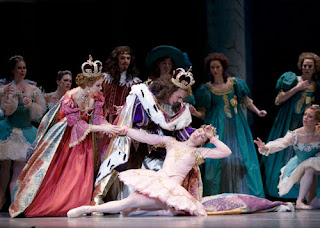 Yet where would our lovely heroine be without her handsome Prince? Seth Orza proved his mettle by meeting the challenges of this highly demanding ballet. Orza starts out as a dashing, slightly aloof young man who quickly becomes enraptured by the girl of his dreams (literally). He begs the Lilac Fairy to show him where she can be found, a request which the benevolent fairy is only too happy to oblige. Orza’s characterization is rich and articulate; his strength and power–sheer bliss. When he finally kills the wicked Carabosse then leans in to kiss his beloved Aurora, you have to literally stop yourself from cheering.

The third act of this ballet is filled with some of the most well-known and cherished variations. The Gold and Silver Pas de Trois, featuring Lindsi Dec, Andrew Bartee and Lucien Postlewaite was refreshing, effortless and commanding. I was duly impressed with how well Dec’s strength and beautiful lines held their own against Bartee’s and Postlewaite’s esteemed technical prowess and bold execution.

The Bluebirds (Rachel Foster and Benjamin Griffiths) were absolutely stunning. Griffiths shined with his jaw-dropping leaps and jumps, while Foster’s fluttering movements provided a sense of harmony and balance.

Red Riding Hood and the Wolf (Abby Relic and Jerome Tisserand) was mildly sinister yet extremely charming. I heard more than a few giggles emanating from the children in attendance.

However, it was the humorous dance between Puss in Boots (Jordan Pacitti) and the White Cat (Sarah Ricard Orza) that really got the audience’s attention. This talented duo made the most convincing pair of sparring felines imaginable. Pacitti was the ever-determined suitor vying for Ricard Orza’s finicky feline affections; Ricard Orza transformed herself into the most feisty little kitty cat, holding Pacitti at arm’s–or claw’s–length. After multiple strikeouts, Pacitti finally decides to give Ricard Orza the gift no kitty in her right mind can resist; a tasty mouse!

By taking on this technically demanding ballet and performing with aplomb, Pacific Northwest Ballet has once again proven itself worthy of the highest of accolades. The dancers enamored the audience with their incandescent performance and spawned a new generation of wistful Auroras! 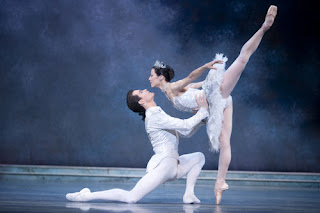