Well, I'm starting to feel "healthy" again but poor Abby has succumbed to The Bug as of yesterday. Ethan's still clinging to The Bug as well (or should I say, the bug's clinging to him). Which means we stayed home from church and we're going through an awful lot of Children's Tylenol! :o/ Good thing I bought a bunch when I did. (Yikes) 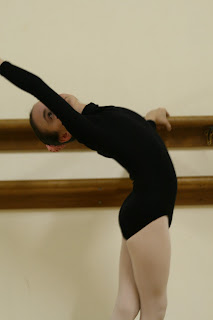 I just hope she's able to beat this thing sooner than Ethan. He's working on his second week, which is a bummer in itself. But Abby's in the middle of learning her ballet recital, and every missed class quickly adds up. (Not good!) *Speaking of ballet, the pic to the right is Abby during last week's Parent Watch Day. Isn't she cute? :) *

On a lighter note, I've been feeling rather proud of my recent coupon transactions. Yesterday, I scored 3 half-gallons of almond milk and 3 boxes of cereal for $2.80. Then today I scored 4 boxes of fruit snacks for $2.50 then received a $2.50 catalina (receipt coupon) off my next transaction. This basically made those fruit snacks totally free! :) Hooray!

These little deals make me even more excited to get the Sunday paper and all those yummy coupons! :) I took advantage of a special deal on the local paper to where I'll get 5 Sunday papers each week for dirt cheap. Woohoo! If you're in my neck of the woods (Lynnwood/Edmonds/Everett WA) check out the deal for yourself here. (Thanks, CouponConnectionsNW! :) ) What's more, is that I've got my Mom all coupon-happy now, too. Hee hee! She also signed up for the newspaper deal, so you can tell what the two of us will be doing tomorrow! "Did you see the coupon for XYZ in the RedPlum flyer?"..."Oh goodness, yes!" {Snip, snip!}

And on another happy note, I've received a few books to review in the mail which always makes me happy. (I mean, hello? Free books!) These aren't "school" books either, but actual fiction/brain candy books. :) The good stuff!

Now, I have to get back to "work" and hammer out a few reviews that are due this week. I meant to get them done last week but I was sick sooooo.....yeah. Time to play catch-up!
Brought to you by Unknown at 5:00 PM