On a delightful note, Abby was recently featured in two of our local papers: The Weekly Herald and the Daily Herald (in which she was on the FRONT page!) Here is the link to the Daily Herald's article, in case you're interested:

Sadly, things got a little side-tracked following Saturday's performance. During the fight scene, both Abby and another toy soldier are captured and carried off-stage by a villainous "fighting mouse". Unfortunately, the "fighting mouse" accidentally tripped over the hem of his costume, and both Abby and the other child were dropped.

The other child is fine (thank goodness!), but the mouse landed on Abby's right foot. Hard. (I'm telling you, watching that happen while you're sitting and watching from the audience is the worst.feeling.ever!)

We're not supposed to pick up the kids until intermission, so once the final "snowflake" made her exit and the curtain came down on Act 1, Dean and I were both up and running! After what felt like an eternity (maybe 10 minutes?), the children's backstage coordinator came down to get us.

In the meantime, we'd heard conflicting stories from the various children in her cast who'd repeatedly asked, "Did you see Abby? She got DROPPED!" Some would say that she'd hurt her nose. One said she'd BROKEN her nose! (*Gasp*) Another said "they called the doctor to come!"...oh my!

Turns out, none of that was exactly true. Her nose was fine and there is no "doctor" but rather the company's physical therapist who is backstage to deal with dancer's injuries as they happen. They'd thought it was her nose because apparently Abby had been holding her face in an effort to not cry, or hide her face so others wouldn't see her cry.

Her foot was swollen, bruised and painful to walk on. The physical therapist suggested she get x-rays the following day. (Yikes)

Thankfully, those x-rays revealed no sign of a fracture. Just a lot of swelling, bruising. She's been icing it like crazy and not taking class (which just about kills her, let me tell ya!). And while it's getting better, it still hurts to do things like point or go up on releve`.

However, she's been cleared to perform as she's only "marching", but she'll be icing before/after the show plus getting her foot lightly wrapped prior to going out on stage. Tonight will be her first night "back" (she'd missed Sunday's performance, obviously), which will serve as sort of a "test" to see whether or not she needs more time off. (She's really hoping and praying that that won't be the case.) 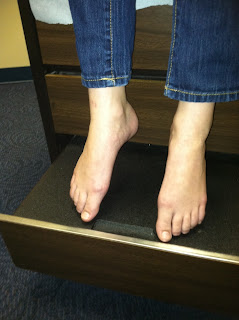 On a more humorous note, while we were waiting inside the doctor's office, Dean was taken aback by the condition of Abby's feet since starting pointe. (He obviously hasn't seen her barefoot in awhile.) Even more funny - the doctor had to ask, "So which foot did you hurt again?" ;-)

{Honestly, they're really not that bad...yet.}