There's a saying I have that sums up the wealth of my handy (wo)man expertise: If I can't glue it, tape it, or kick it then it's broken! :o)

My mother shares this expression. In fact, here's a page from the book of our latest exploits... 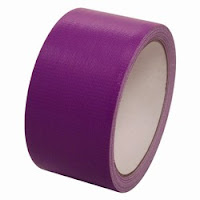 Now as most of you probably do not know, my step-father suffers from the same chronic neck, arm and shoulder pain issues that Dean does. (Interesting, no?) Dean's is his left arm, Ed's is his right. Anyhoo...the point is, Ed can't do a whole lot around the house anymore because it hurts too much. And whenever he does manage to work on something, he's literally down for the count for days after. Seriously. It's not good.

So us Washingtonians are sweltering right now in a blast of July heat. My parents don't have their A/C installed yet so my Mom asks Ed to do it. (*I should also state for the record that my mom has zero upper body strength and has horrendously weak wrists and carpel tunnel.) He manages to get it half way in and then realizes--he doesn't have any plexiglass to install above the unit to keep the bugs out/serve as a fake window.

Which means my mother's living room was filled with bugs this morning. Ick.

My mom of course, hates both bugs and the heat. So she's just itching to get the A/C installed properly, plexiglass or not. We were talking about this earlier today over the phone when my mother said, "Well I know we have some visqueen around here somewhere."

"That'll work!" I said excitedly. "Yes, but he won't let me put it up. He won't even tell me where it's at, and the last time I used the sticky tape stuff, I apparently messed it up," my mom pouted. This was in addition to my mom self-fixing her busted tail light with Super Glue. Apparently my step-dad wasn't pleased with the results and said she should've waited to use some sort of contact cement or something. Whatever that is.

So in order to bring her and her house some relief from the heat, we put our heads together and came up with several ideas including but not limited to:

And as soon as my mother sends me a photo, I'll be sure to share it.
Brought to you by Unknown at 2:39 PM

You girls crack me up! You remind me a bit of me and my mom. For the past 3 or 4 years, we've been trying to solve a certain door problem in my home - we want my back door to open in, not out - and we've gone through numerous solutions that sound doable to us, but never seem to make much sense to the contractor. LOL I'm glad we're not alone! I'm also glad that your mom solved her problem (with your help/advice) and that's she's cool(er) and bug-free. :)